Your Investments Are in Big Trouble

Your Investments Are in Big Trouble

This is the first of a four-part series where I’m going to make some pretty unconventional investment recommendations.

The Next Bubble to Burst

Let’s pretend it’s December 2006 and you have $100,000 ready to invest in anything you want. Now let’s pretend that you were pretty sure the housing market was in a huge bubble and it was about to burst. What would you have done with all that money?

With the other half, you:

As you can see, predicting the housing bubble bursting and investing half of your money on that happening would have resulted in about a 54% gain over a 3.5 year period. 54% is incredible any time, but it’s especially good over a 3.5 year period where almost everyone else lost money in the market.

I know what you’re thinking: it’s easy to suggest shorting financials and buying gold in 2006 when we’ve already seen history play out. But there are people, professional investors even, who were predicting the burst of the housing bubble in 2006. One professional investor, Peter Schiff, was ridiculed for these predictions on many TV shows. One host even said, “I know you want to continue that expose on Santa Claus.” You can see all the embarrassing proof in this youtube video:

Considering the fact that Peter Schiff successfully predicted the burst of the housing bubble in 2006, I was curious to find out what he believes is happening today. Luckily he just put out a new book titled The Real Crash

Peter Schiff Says to Prepare for The Real Crash

Peter Schiff didn’t just predict the burst of the housing bubble; he is the CEO and chief global strategist of Euro Pacific Capital. Being a CEO of an investment brokerage doesn’t mean he can predict the future, but he’s not some Joe Schmo either.

And I see no reason to doubt him. We all know Greece is in a boatload of trouble right now. Officially Greece’s debt-to-GDP ratio in 2011 was 165.3%. Due to Greece’s unsustainable debt problem interest rates on Greek two-year government bonds rose from 3.47% in January of 2010 to 177.37% in February of 2012.

Basically Greece has so much debt that no one is willing to lend them money. To put it in terms that are easy to understand, Greece is like a person who has $355,600 of debt, makes just $40,900 a year and spends $50,100 a year. Would you lend that person money? I doubt it. source-wiki

Obviously Greece is bad, so where is America today?

According to these numbers we aren’t as bad as Greece, but we also have some huge problems coming down the line.

If our government was serious about fixing this problem, the first step would be to get tax revenue and spending on the same level. Unfortunately neither political party is proposing any significant spending cuts (which is the only solution in my opinion). If you are someone who believes taxes should be raised to fix the deficit, neither party is proposing any significant tax increases either (the Buffet Rule would bring in only $162 billion over 10 years, or about 1% of the debt).

It doesn’t matter whether we have a Democrat or Republican in the White House either. Since 2000 our government has shown no desire to decrease the national debt, and neither Barack Obama nor Mitt Romney has publicly stated any desire to stop spending more than we bring in from tax revenue. 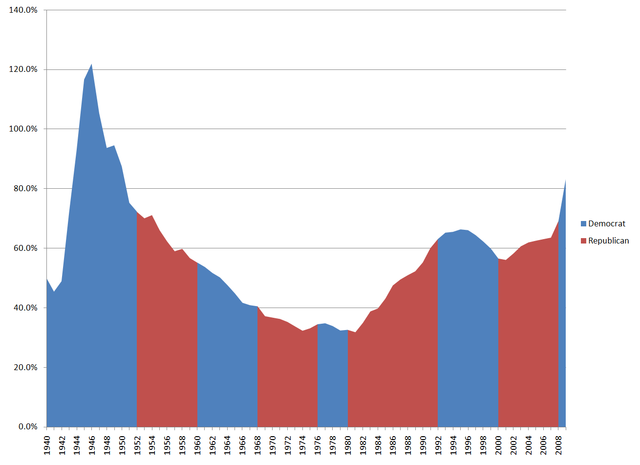 How Much Time Do We Have?

If Peter Schiff and I are right and the American government “bubble” is going to pop, the question is “when?”

Unfortunately no one knows exactly when it will happen, but I can tell you what it will look like. When other countries start seeing American government bonds as risky investments they will start demanding higher interest rates like Greece is seeing now. You might remember hearing about the drop of the credit rating on US debt last year. That’s the first step to higher interest rates.

At that point we won’t be able to borrow because interest rates will be too high, and we won’t be able to pay those increased rates because we won’t have the money. Either we default as a country, or we print a bunch of money and go through a period of hyperinflation.

No matter whether we default or hyperinflate the dollar, the result could be really bad for your investments if you don’t prepare yourself. I’ve personally been worried about the American Government bubble popping for some time, but I wasn’t smart enough to know what to do with my money to protect myself. Luckily Peter Schiff has some suggestions, which I’ll talk about over the next few days.

I’ll leave you with one final video that takes a humorous approach to explaining America’s financial situation:

If you are fascinated by finance and how it works, completing courses towards an economic crime management degree will not only help you have a better understanding of finance but also help you find the career the give you financial security.

Readers: Do you think the American Government is a bubble that is liable to burst in the next few years? If not, why?

Yakezie Carnival at Edward Antrobus
Carnival of Retirement at Write and Get Paid
Carnival of MoneyPros at I Am 1 Percent
Y & T’s Weekend Ramblings at Young and Thrifty
Carnival of Fin. Camaraderie at The University of Money
Canadian PF Happy Hour at Canadian Personal Finance
Carnival of Financial Planning at The Skilled Investor