I Saved $700 Replacing the Suspension On My Car

Have you ever taken your car into the shop and been given bad news: they recommend you do a repair and it’s going to cost over $1,000. I got that news a few weeks ago, and as I’m saving up money for my wedding I knew I didn’t have that kind of money for repairs.

I also knew that I needed to replace the suspension, or struts, on our car. We have a 2000 Buick Century and it meets the criteria for the greatest car in the world: it runs and we don’t have a car loan. The problem is the car is 13 years old and has almost 130,000 miles on the odometer. And in all that time, the suspension had never been replaced.

Did I Really Need New Suspension?

So the shop told me I needed new suspension, but were they being honest or just trying to get me to pay them to do some work? I did a little research and found this link from Pep Boys that gives some recommendations for when to change your struts and shocks. Some of the symptoms we were experiencing were uneven tire wear, excessive nose dive when breaking, and excessive vehicle bounce.

When we hit a bump in this car it would bounce up and down for about 5 minutes until it finally settled down. Okay, I might be exaggerating a bit.  But it was pretty clear that the car could use new suspension. I want us to be safe as we take some trips (like a road trip to St. Louis for the Financial Blogger Conference where I’ll be the MC for the Plutus Awards again this year!).

I was willing to accept that we could use new struts and shocks, but I wasn’t willing to pay $1,100 for the new parts and installation.

I know how to change my oil and change a flat tire, so I decided to see if I could change out my strut assemblies as well.

I don’t know much about cars, but here’s what I know about the suspension. If you want to change just a small part of your suspension (like the strut itself) then you need special tools to decompress tightly wounds springs. It can be very dangerous, and in my case I didn’t know which specific part of the strut assembly would need to be replaced. I opted to just order brand new pre-built strut assemblies.

for $131.82. The shop quoted me $620.22 for the parts they were going to use. That’s a savings of $337.98 already. If I wasn’t able to install them myself, I could have at least bought the parts and had that shop install them. That’s still a big savings that many people don’t consider. Keep in mind, the shop might take longer to do the install (aka, charge you more in labor) if there is anything about your parts that are different from the ones they are familiar with.

I have a set of rhino ramps for changing the oil in the car, but you can’t use rhino ramps when you are taking off the wheels. Thus, I had to buy a jack and jack stands. I also needed another set of wheel chocks to make sure my car didn’t roll away once I jacked it up. If you work on your car often, you probably already have these tools and won’t need to buy them. Here are the ones I ordered:

After tax my total came to $103.44. I also needed a ratchet set and a hammer, but if you don’t already have those things then you might want to reconsider doing this kind of work. Also, prices change on Amazon all the time so they might be more or less if you click through to check.

How to Replace Your Suspension 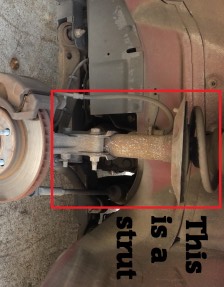 actual photo of my car

This isn’t an auto blog so I won’t bore you with the details, but it’s actually pretty easy. Here’s essentially what I did:

So that’s the simple version, although it did take me about 6 hours. For someone who is a little more experienced with working on cars, it would obviously take much less time.

Here is one of the many video tutorials I used to help me figure it out. It’s all online and it’s all free.

One final step is to have the car aligned. I don’t know how to do that so I just paid the shop $90 to do it for me. If you are up for figuring that out yourself then go for it. It seems complicated and at just $90 I think it’s worth it to let the professionals do it.

Here’s the bottom line: I replaced the suspension in my car, making my car safer and helping it last longer (which is important since it’s our only car). I also did it for over $700 cheaper than it would have cost to have the shop do it.

As far as I’m concerned, I made about $116 per hour working on my car. I don’t know about you, but I don’t even make half that much at my normal job.

If you can work on your own car, do it. You know I’m not a big fan of frugality and pinching pennies, but we’re talking about hundreds of dollars here.

Readers: Have you ever worked on your car to save yourself money on repairs? What did you do and how much did you save?