Joe Biden’s Net Worth is Embarrassing!

Joe Biden’s Net Worth is Embarrassing!

Last night I read an article on Bloomberg about how former vice president Joe Biden released his financial holdings to the public.

Now I know why his administration couldn’t balance a freaking budget!

I thought it had to be a mistake. There’s no way someone with his income history has so little money saved. I went straight to the White House website and looked at his financial disclosure report and by golly, this guy is a personal finance idiot.

Joe Biden has been banking an upper-middle class salary for almost 40 years and he has well under a million dollars to show for it. The fact that this guy’s opinion might even be considered in any fiscal matter concerning the United States of America is absolutely terrifying.

It Gets Worse Mr. Vice President

To put it very nicely, the information above tells us that Joe Biden is about as good with his money as John Daly. Based on the following information, it gets worse. Much worse.

Biden is married to a woman who taught English in high school for 13 years, then taught at a community college for 16 years, and has been employed for the last two years as an adjunct professor at a community college in Virginia. Teachers aren’t paid as well as politicians, but if we make a very modest estimate that she’s earned an average of $30,000 a year over her working career, that’s another $930,000 of income for the Biden family. With a more realistic estimate, her income is probably well over $1 million.

We are also neglecting to include any of the income he made before his political career. Biden was elected to the Senate at 30 years of age. Before working in the Senate he was a practicing lawyer with his own private firm and an elected member of a county council for two years. I have no idea how much he made during this time, but let’s pretend it’s $0 just to make him look better. You’re welcome, Joe!

Maybe he was riddled with student loan debt? Probably not. He went to college decades before the current education bubble, so prices would have been reasonable in the ’60s. His undergrad degree was from the University of Delaware, which has an annual tuition of $8,540 for in-state residents today. I’ll take a wild guess and say tuition was probably well under $1,000 a year when Biden attended. His law degree is from Syracuse, which is about $44,000 a year today but was obviously much cheaper in the 1960’s as well. We can pretend he had a few thousand bucks in student loan debt, but nothing a lawyer/senator can’t pay off in a year or two.

Joe Biden is a Financial Embarrassment

I usually don’t care what famous people do with their money. They have earned it and they can do with it as they please. I also understand that Joe Biden is in line for a nice pension, so he’s not going to be hurting for money when he’s done being a politician. 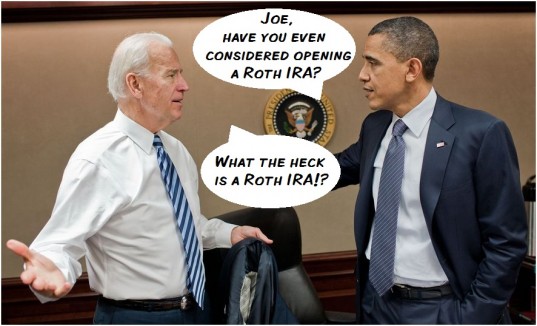 My issue is that we are slowly recovering from the worst financial crisis of the last 60 years and Joe Biden, the man who turned millions into thousands, is one lunatic with a gun away from being the President of the United States.

I’m not saying that having millions in net worth means you will do a good job addressing the economy and the federal deficit (see: Bush and Obama), but I do think having a basic understanding of saving and investing money is important if you are going to potentially have the ability to sign or veto bills on economic and financial legislation.

I don’t think I’ve ever been so happy that the Secret Service is awesome at their jobs as I am tonight.

For more on the Politicians in office and how they can affect us, and how we can better ourselves check out these articles.

Mailbag: Should I Stop Investing, Because Trump Won
So you want to learn economics
Freedom Cannot Coexist With an Income Tax