What Is Universal Basic Income? 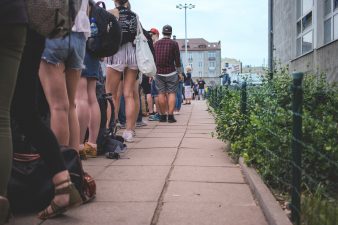 When I was a child, I don’t like to say I was poor. I was definitely from what you would call a, “working class,” family. Yet, I think that most people, in our current socioeconomic atmosphere, would equate that term with poor. In the 1980s, I grew in the era of Ronald Reagan, trickle-down economics, and the economic insecurities of urban living.
My mother raised nine children on her own and worked numerous jobs.

She used to take us to the local social assistance office from time to time. The line emanating from this office would go down the block. We would get a care package that featured ominous looking bricks of processed cheese, tins of unsweetened apple sauce, boxes of raisins, flour, and some other items. Too many people believe that poverty is a concept that is inherent in particular races, ethnicities, or classes of people.

But poverty is never so discerning when it comes to race, politics, or deeply held political beliefs. One person who makes $12,500 a year, or, a family of four surviving on less than $25,100 a year, are considering poverty line levels in the United States. Poverty also has a lot to do with income inequality. Over 17% of all Americans spend over half of this annual income on rent.

Also, poverty affects people regardless of race or political persuasion. The American states with the highest rates of poverty include Alabama, Arizona, Arkansas, Georgia, Kentucky, Louisiana, New Mexico, Mississippi, Oklahoma, and West Virginia. The recent shutdown of the American government, and the incalculable economic stress it caused federal employees reveals how close most Americans live near the poverty line.

Rhetorical arguments stressing who deserves, or who is destined to be poor, doesn’t solve the issue. One debated solution to the issue is universal basic income.

What Is Universal Basic Income?

Universal basic income is the concept of giving every citizen, regardless of social class, race, ethnicity, or income status, a monthly income. There are no strings attached and no need to work for it. A UBI is not a recent liberal conspiracy plot to hand out money at the expense of the rich. It is an idea that dates back to the 1600s. A typical UBI payment could amount to $500 or $1,000 a month.

UBI programs and initiatives have launched in various countries in recent decades, even months. These include the United States (Stockton, California), Brazil, Finland, India, Italy, the Netherlands, Scotland, and others. A UBI payment is designed to aid with everyday living allowances or inspire people to improve their lot in life. Critics believe that UBIs do the exact opposite.

Specifically, they will inspire people to depend on government-issued payments and not want to work. Many critics also say that issuing $12,000 to every citizen over the age of 18, every year, would cost about $3 trillion a year. It is an amount that would bust any federal budget.

Understanding What a Robot Tax Means

Why should you know about UBI? In the next few decades, advances in technology and A.I. will obsolete entire industries of employment. Regardless of race or class. Many American, almost 48%, would be fine with a UBI as a form of “robot tax,” to counteract the effects of job loss to A.I. The concept of UBI may become more interesting to people once the job-obsoleting onslaught of A.I. begins in decades to come.