Get Married for College Money

High school kids who need money for college spend hours upon hours filling out forms and writing essays to earn scholarships. Little do they know that the only thing they really need to submit is a marriage license form.

I got this crazy marriage idea from one of my favorite bloggers, Paula, at Afford Anything. Paula started her blog just a few months ago and it immediately jumped into my Top 3 favorite blogs, with the other two being Punch Debt in the Face and Budgets are Sexy. I think this is what you call “holla-ing at ya boyz.” Yeah, I’m pretty gangsta.

Getting back to the point, the biggest obstacle most young people face when they are looking for free college money is their parents’ income. A young single person (under 24) must report his parents’ income on his FAFSA when applying for federal student aid. The more his parents make, the less he’ll get in grant money.

What if he could leave his parents income off the FAFSA and only report the money he made at his part-time job serving scrumpdillyicous blizzards and shakes at Dairy Queen? He would look so poor, his financial aid package would increase by many thousands of dollars a year. If only there were a way…

There is! He just has to get married!

Get Married and Save Tens of Thousands

A young married man can claim himself as an independent on a FASFA as long as his parents don’t claim him on their tax return. That means his financial aid would be based only on his and his wife’s income, which should be as low as $0 and as high as a few thousand bucks as long as he picked the right wife.

This is a great plan in theory, but the problem for most people is that they haven’t fallen in love before they graduate from high school.

Find a friend who also wants to save tens of thousands of dollars and do a quick justice of the peace ceremony. You don’t have to kiss, hug, or even touch your “spouse”. You really don’t have to spend a single moment with that person after all the legal formalities are taken care of. Just make sure you file your taxes as a married person for the next four years and the both of you can enjoy your gratuitously discounted college education.

Tips On Marrying For College Money

Here are a few things to keep in mind if you plan to marry someone for college money.

Don’t Marry For College Money if…

I admit, this strategy isn’t for everyone. If you fit in one of the following categories, don’t even think about it. 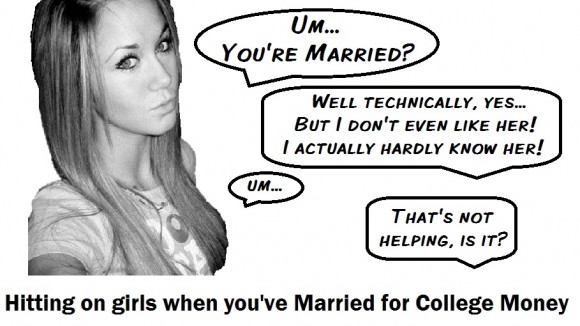 A Creative Solution to a Common Problem

A lot of people are going to say this is morally wrong. I’m usually a moral stickler; I even think coupon sharing is stealing. However, there is no law that states a marriage must be based on love. A legal marriage is nothing more than a contract between two people if you choose to look at it that way. If this contract benefits you, then why wouldn’t you enter into it?

Your bank account is hoping you pick the latter.

Here are some of our top posts:

Joe Biden’s net worth is embarrassing

How much does Invisalign cost